I drive past this monument daily and although I have always had a vague idea of the story behind the man, it wasnt until recently I learned something shocking about him that really grabbed my attention and I suddenly had an urge to know more about him. 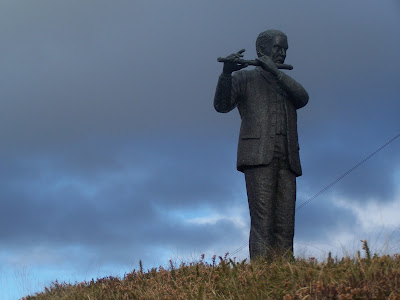 Did you know, that this poor man lost not one, not two but FOUR of his children ON THE SAME DAY – to the same disease.  I found that so appalling and so heartbreaking that I immediately wondered about him, about his life and what he must have endured.

Here is the story of  Captain Francis O’Neill
– the man who saved Irish Music.
Captain Francis O’Neill, who not only gained admiration for being nominated as Chief of Police for Chicago city but also for his remarkable and invaluable contribution to traditional Irish music, was born in rural West Cork during 1848.   It is said by Richard Jones, music librarian at the University Of Notre Dame that “without him, the music would have died or it would have gotten changed so much the original would never have been remembered”. 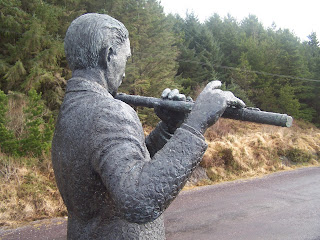 Daniel Francis O’Neill was born on the 28th August 1848 at Tralibane in the parish of Caheragh near Bantry in West Cork.   He was born to parents John and Catherine O’Neill and was the youngest of a family of seven children.  Both Daniel’s parents were keen musicians with strong musical backgrounds and the O’Neill home was a centre for Irish music in the area where singers, flute players, fiddlers and pipers would meet and exchange tunes.  On Sunday’s, the family, along with other musicians, would meet at the local Tralibane Crossroad and play their favourite instruments for people who gathered there for song and dance.  These were the musical memories imprinted on O’Neill in his formative years.
He attended primary school at Dromore National School, before moving to school in Bantry where he made a positive impression on all this teachers and was made “school monitor,” a role which would have eventually led to a full-time career as a school teacher.  However, at the tender age of sixteen, Daniel ran away from home after an alleged dispute with a sibling.  In Cork city, he got a job as a cabin boy on a vessel sailing for England and from there, found work on other ships which resulted in him spending several years at sea.  During a voyage aboard the “Minnehaha” when Daniel was just 21 years old, he was shipwrecked in the South Pacific.   A passing ship rescued him and eventually docked in San Francisco where it seems that Daniel changed his name to Francis.  Francis did various jobs in America such as herding sheep in Nevada, teaching in Missouri, and as a sailor on the Great lakes, before joining the Chicago Police Force in 1873.

In the force, he was first stationed at Harrison Street and during his first month of service, O’Neill was shot and seriously wounded in the course of duty by a notorious Chicago criminal named John Bridges.  One of the bullets which had lodged dangerously close to his spine, could never be removed and remained there for the rest of his life.  Five years later, O’Neill was promoted to Deering Street, an area in which large numbers of Irish people had settled.  At the time, there were around 40,000 Irish people in Chicago representing about 13% of the population.  The Irish had been moving to Chicago since the 1830s were they took up employment digging the Michigan/Illinois canal.  By the year 1900, there were over a quarter million Irish people in Chicago thereby providing a huge reservoir of Irish Music and Traditional Irish Dance Tunes, in which O’Neill reveled.   Through diligence and dedication, he rose steadily up the ranks until in 1890 he was promoted to Lieutenant, in 1894 to Captain and finally to Chief of the Chicago Police in 1901, where he had 3,300 men under his command.
In 1871, Francis married Ann Rogers, who had emigrated to America from Co. Clare.  Ann shared Francis’ passion for music and their home at Poplar Avenue became a meeting place for all known Irish musicians – fiddlers, dancers, flute players, pipers, accordion and concertina players.   O’Neill regularly visited every musician he knew and listened to them and played their tunes. Whilst on patrol duty he frequently came across Irish musicians playing music on the street or in taverns and made a point of making their acquaintance. If there was no particular title for a tune he named it after the person whom he had heard playing it. O’Neill had the extraordinary gift of being able to accurately memorise any tune which he had heard, and despite not having the ability to read or write music, he had an exceptional ear. Sergeant James O’Neill from Co. Down, who served on the force with Captain O’Neill, was able to write down music on hearing the tunes hummed, whistled, lilted or played.  Through him, Captain O’Neill managed to record and commit to music-sheets all the tunes he had memorised. The tunes which were collected by Captain O’Neill were numerous and varied and in 1903, after failing to secure an interested publisher, he took the plunge and privately published “O’Neill’s Music of Ireland” which contained a total of 1,850 Irish Melodies.  Later, the same book was published under various titles but has always been regarded as the “bible” for traditional musicians.  In 1907 he published ‘The Dance Music of Ireland’ which contained 1,001 dance tunes. These books were followed by ‘O’Neill’s Irish Music’ in 1908; ‘Irish Folk Music – a fascinating hobby’ in 1910; ‘Irish Minstrels and Musicians’ in 1913; ‘O’Neill’s Irish Music’ in 1915; ‘Waifs and Strays of Gaelic Melody’ in 1922 and ‘Waifs and Strays of Gaelic Melody 2nd Edition’ in 1924.  During his retirement, Captain O’Neill became totally immersed in his collection of music and took advantage of the latest technology of the day, a phonograph, to make as many recordings as possible.
Captain O’Neill was a remarkable man and although his career and musical hobby flourished, his private life experienced soul destroying tragedies.  He and Ann were blessed with ten children, five boys and five girls who were all brought up with a passionate interest in Irish music.  His eldest son Roger, was a brilliant student and an exceptional violinist who sadly died of spinal meningitis at the age of eighteen in 1904.  The O’Neill family were also visited by severe tragedy when on one single day they heartbreakingly lost three young sons and a daughter to Diphtheria. 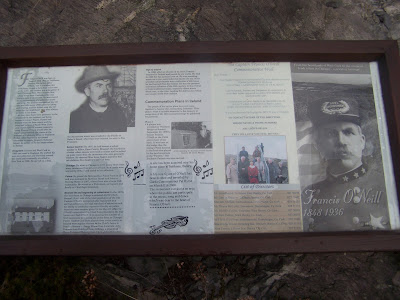 In 1906, a year after his retirement, Francis travelled to Ireland with Ann and spent a lot of time visiting in the Munster area and renewing acquaintances with musicians whom he had met in Chicago.  During his visit, he also made arrangements for the erection of a high Celtic Cross headstone to mark the graves of his parents in the Caheragh Cemetery.
Ann O’Neill died in 1934 and Captain O’Neill remained in the care of his surviving daughters.  He owned a farm in Illinois as well as a winter home at Ocean Springs, Mississippi and alternated between the homes filling his time with fishing, pottery and photographs and music.  On the 28th January, 1936, at the age of 87, Captain O’Neill died of heart failure at his home in Chicago. 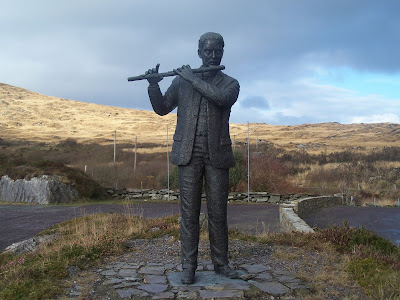 Today, there is a dedicated committee from the parish near O’Neill’s native home place of Tralibane, who have erected a life-size bronze monument depicting O’Neill playing a flute.  They have also constructed a commemorative wall as well as a plaque at the Tralibane bridge.  Every year, there is a mid-summer dance festival held at the monument as well as open-air Pattern Days to honour the man who saved Irish Music.  A book by Nicholas Carolan about O’Neill is aptly titled “A harvest Saved”.