Saint Patrick’s Day in Bantry and this year there was a lot of talk as to why Bantry is the only town on the planet that does NOT hold its Saint Patricks Day Parade on the 17th itself! 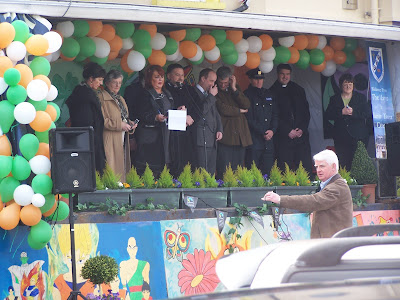 The official answer to this question was that the music bands are only available on weekends.   The bands, this year being The Cullen Pipe Band and the Ballingeary Pipe Band were really very good and added a lovely dimension to the proceedings.

//www.youtube.com/get_player
However, there are a lot of people who feel that by waiting until Sunday to have the event, steals the puff out of the party.  A lot of attendees had already gone to a parade on Thursday and others simply did not show up today as they had already been to a parade, done the ice-cream, done the bouncy-castle and face-paints – done Saint Patrick’s Day!  Perhaps a local aspiring band or a school band can volunteer to perform next year so that Bantry can go ahead and have the celebration on the 17th March. 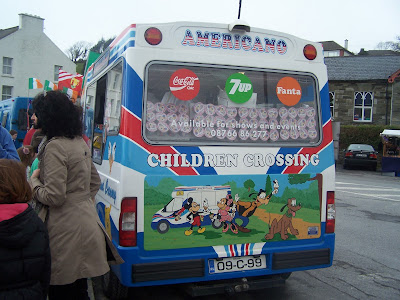 The favourite today (aside from the ice-cream van) was certainly batman on his mobile trying to sell a bale of silage for a thousand Euro.  His antics had the kids in hysterics and he and the vehicle behind him ended up having an impromptu water fight which delighted everyone!
//www.youtube.com/get_player
I must dash outside now to see if I can see the moon.  Last night (full moon) it was apparently 14 percent bigger than it usually is.  This is due to the fact that for the first time in 18 years, the full moon took place within an hour of the moon’s perigee (its closest approach to earth) Sadly, it was so overcast last night I missed it.     Oh dear, same sky conditions tonight – so cloudy not a star in sight.